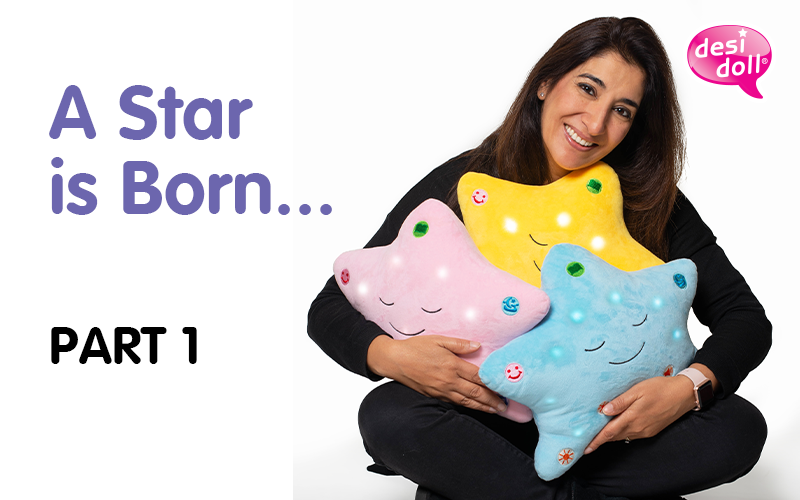 I thought I’d give you an insight into how I come up with my concepts and ideas, and a taste of a typical but not always straightforward journey from concept to shelf!

On Monday 19th December 2016, at 1am in the morning, I very excitedly sent an email to my factory in China. I often worked late into the night – as a working mother, running my own business, and dealing with colleagues on both sides of the globe ie. the Far East and USA, means my working hours have to be very flexible.

I had been working on this amazing new idea, and it was that cold and frosty, December night that I got the ball rolling with the factory.

My twin boys had just turned 10, and I would always tuck them in at bed time. I always made sure that they would recite some special prayers before they slept – it was the tradition (Sunnah) of our beloved prophet Muhammad (peace be upon him) to recite certain verses from the holy Quran: the 3 Quls, Ayatul Kursi, and the dua’ before bedtime. This was our usual bedtime routine. One night as I tucked them in, I got thinking…

How many children know about this Islamic tradition. It’s definitely not something I had grown up knowing, nor was it something my mother had specifically taught me although I learnt so much from her, the night time Sunnah was not one of them.

Much of my adult life has been spent being curious about my faith, and learning how to develop my own connection with Allah and become closer to Him. As a mother, I try to pass on as much of that knowledge as I can to my children, so that from the youngest of ages they grow to learn and love their faith too.

And then I wondered, how many parents know what the Sunnah of what to recite at bedtime, and how are they sharing that with their children, if at all? An idea popped into my head almost instantly – how about creating a toy that would be a Muslim child’s bedtime buddy, helping them and reminding them of these beautiful supplications before they went to sleep!

Don’t forget, I’ve been in the business of creating interactive and fun Islamic toys, since 2008, so my company was 8 years old when the pillow idea was born – My mind is constantly trying to find fun ways to nurture Islamic learning in kids – this was the way my brain worked!

My Dua’ Pillow was to be my 15th toy design/invention!

I had done my research and there was nothing like it on the market – and I mean NOTHING like it in ANY market in any part of the world!

Next I did some further research, which involved reading and studying regarding the supplications – I took advice from a variety of teachers and scholars and finalised the script. Lastly, together with my 3 kids we wrote the words to a beautiful lullaby nasheed. I remember all 3 of them sitting on my bed, and suggesting words and phrases, and trying to make them rhyme! They all had a lot to contribute!

As this was a bed time toy, it made sense to design something soft and cuddly. And the concept developed further to create a plush pillow with both light and sound. ie. a pillow which would light up, and buttons that would talk when pressed. What shape would this pillow be? After some rough sketching, I realised that it had to be a 5 pointed star – it fitted perfectly with the night time theme, it
was an Islamic symbol, and also matched the 5 sound buttons needed for each section of the script.

The colour and embroidery design of each button had to be given careful thought. There would be a button on each point of the star. One button would be a green book, that recited Ayatul Kursi. There would be a smiley face button which would recite the 3 Quls.
A button embroidered with moon and star that recited the dua’ before sleeping; a button with an orange sun embroidered on it, which recited the dua’ when you wake up, and then of course a musical note button that would sing the beautiful lullaby nasheed, and soothe any little one off to a beautiful slumber.

I also added a switch for the night lights to come on and of – kids love lights at bedtime! Also, a handy timer meant the lights would switch off automatically after 15 minutes – so the batteries would last longer. I also added a volume button, so that at night time the sounds could be soft on the ear – it’s amazing how loud everything sounds at bed time!

I discovered a very talented voiceover in my son Sami – a beautiful voice – who knew! Lol! Sami, who has the patience of a saint, spent hours being voice coached over a period of many weeks. He then completed the recording, in a professional studio in the presence of an Arabic Tajweed expert to make sure everything was just right!

We took delivery of our first batch of My Dua’ Pillows in June 2017, just in time for Eid-ul- Fitr! It was one of the fastest turnarounds from concept to shelf in just 6 months! My Dua’ Pillow was a sell out success! We’d actually sold out before the pillows landed on UK shores! Al Hamdulillah! That was a first! Since then, we have expanded the range to include more colours, and it’s one our best selling toys!

It’s such a satisfying feeling to know that so many children around the world were not only learning the Sunnah of bedtime thanks to my light and sound pillow invention, but also knowing that bedtime time was now a more enjoyable experience for parents and children. Especially for those children that don’t settle so easily, they now enjoy cuddling up with their glowing night time buddies! You can almost hear the sigh of relief from so many parents!

We’ve received countless reviews from grateful parents- and that’s the cherry on the top! Hope you enjoyed that brief glimpse of how one my ideas goes from that ‘lightbulb moment’ to the shelf!

Look out for Part 2!