Are Your Children Confused about Christmas? Teach them about Prophet Isa (A.S.) according to the Quran 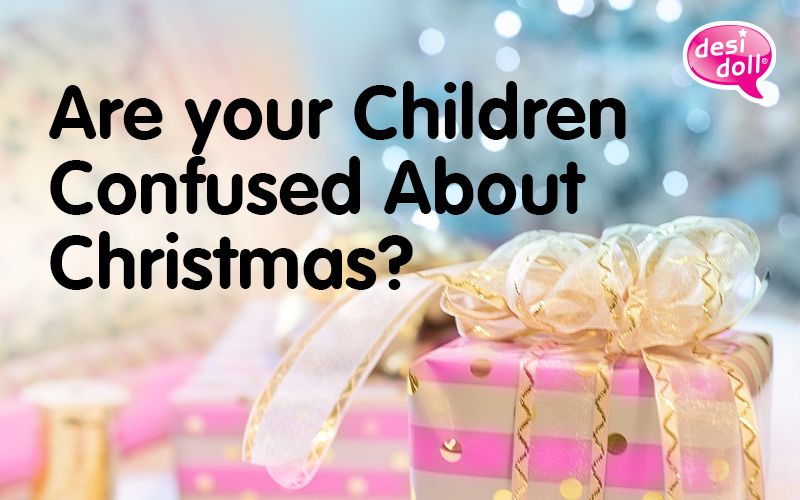 As Christmas approaches, we are all surrounded with stories about Prophet Isa’s (A.S.) miracles, many of which differ greatly with the Islamic version of events.  In the UK we are engulfed by the festivities of Christmas, in the shops, on the TV, at work, and Christmas even becomes the focus of learning in our children’s school.

It would be naive to believe that this is not having an impact on them; and in particular, on their sense of Islamic identity.

It is our responsibility as Muslim parents, to teach our children about the Islamic perspective of the  Prophet Jesus (A.S.), and avoid confusion with the Christian narrative.

Have you ever spoken to your kids about Prophet Isa’s (A.S.) story in the Quran?

Do they understand that as Muslims we believe he is not the son of God?

Do they know that he wasn’t born in a stable with wise men bringing him gifts?

In addition to the differences between the story of Prophet Isa in Islam and in the Christian viewpoints, the true meaning of Christmas has been further diluted by the increasing focus on consumerism at this time. Although gift-giving is one of the oldest traditions this season, it was traditionally a minor aspect of the holiday. Christians themselves will tell you of their   concern that the meaning of Christmas is being lost.

In school, our children are being asked by friends and teachers,

This may confuse and embarrass Muslim children, and make them wish that they too celebrated Christmas.  We should remind our children that Allah has given us not one but two wonderful Eids where we are encouraged to celebrate as best we can and exchange gifts.  Christmas is not our celebration for many reasons.

An interesting point that many of you may already know, along with the majority of Christians, is when was Prophet Isa born – that the actual birth of Prophet Isa (A.S.) was not on 25th December. This date was chosen by the church as it coincided with Pagan festivities of the time and various ancient practices.

Do your children know the story of Prophet Isa’s birth according to Islam?

Prophet Isa (A.S.) is one of the greatest Prophets to ever walk the earth. He was given prophethood at the age of 30 and was given revelation of a new Holy book, the Injeel (the Bible). Before that Isa (AS) followed the Torah. Some people at that time did not    accept the prophethood of Isa (AS) and the new Holy book, and instead clung on to the Torah –  they are called Jews.

Isa (AS) was taken back to Allah at the age of 33.  His name is mentioned 25 times in the Quran, whilst Prophet Muhammad (S.A.W.) is only mentioned 4 times. His mother, Maryam (A.S.) is so honoured that she has an entire Surah named after her, and is mentioned 34 times, being the only woman to be mentioned by name in the Quran. One cannot doubt Prophet Isa’s importance and his high status in Islam, and yet too often we neglect to teach our children about him.

Prophet Isa (A.S.) conducted himself in the most humble and modest manner; in a way that was befitting to one of the greatest Prophets of Islam. He spent much of his time with the poor and outcast of society.

Maryam (may Allah be pleased with her) was totally devoted to Allah, and glorified him day and night. In her lifetime, Maryam was the best of women.  Maryam was very special to Allah, and we know this because when Zakariya (AS) visited Maryam she always had fruits that were out of season, and that were not available to anyone else. And when Zakariya (AS)  asked Maryam where she got this fruit from – she said it was from Allah.

One day the angel Jibreel (AS) visited Maryam in the form of a man, and told her that Allah will bless her with a righteous son.

Maryam left her home to distance herself from people as she was embarrassed and did not know how to explain her pregnancy  to them.

Maryam gave birth to Isa (AS) – but she had no husband. Isa (AS) was a gift from Allah.

Maryam was fearful of what people would say when she returned with a baby -. she decided to offer “fasting of the speech” ie. silence –  where she vowed not to speak to anyone.

When the people asked Maryam how she came to have this child, Maryam didn’t say a word, she simply pointed to  the child. The people said how can we talk to a child who is still in the cradle, but to their surprise, the child spoke,

“I am Allah’s servant. Allah has given me the Book (Injeel), and has made me a prophet, and has blessed me wherever I may be – and has ordained upon me to worship only Allah and help the poor, give in Charity, and be righteous to my mother”.

Speaking in the cradle, was just one of many miracles that Allah had blessed Isa (AS) with. Other miracles were that Isa (AS) was able to heal the sick, heal the blind, breath life into birds made of clay, and even brought the dead back to life.  All by the will of Allah, so that the people would be Thankful to Allah and pray to him. Isa (AS) led a very simple life, wearing simplest clothes and eating the simplest of foods and had no home. ISA (AS) was extremely detached from this world.

Prophet Isa (AS) told the people of another prophet who was going to come later, whose name would be Ahmad. Prophet Muhammad was that prophet.

With all the confusion, and the conflicting messages our children are presented with, it is very important that we speak to our children about Christmas, and teach them about Prophet Isa (A.S.). We do not ridicule the beliefs of the Christians, but rather teach our children to respect the faiths of others.

“And insult not those whom they worship besides God, lest they insult God wrongfully without knowledge. Thus We have made fair-seeming to each people its own doings; then to their Lord is their return and He shall then inform them of all that they used to do”. [6:108]

We hope that you have benefitted from reading this.

If you are not familiar with the story of Prophet Isa (A.S.), then we would recommend the following resources:

Learning roots have filmed a wonderful retelling of the life of Prophet Isa on Youtube. This video is suitable for children aged 3-7.

They also have published a children’s book about Prophet Isa (A.S.) as part of their Stories of the Prophets Book Set. This great resource is ideal for children aged 7+.

This blog post provides a great biography of Prophet Isa (A.S.) for you to read and re-tell to your children.

Another book that we recommend is The Great Miracle – The Story of Prophet Isa (A.S)

There is so much benefit and to be gained from the story of the life of Isa (AS) and his teachings. Now is the time, during this Christmas period, to talk to your children about who he really was.

Have you explained Christmas to your children? How did you do it?

Have you found the Christmas activities your children do at school encourage a love for Prophet Isa, or do they cause confusion?

Do you allow your children to participate in the Christmas Carol service at school?

How do you spend Christmas day?

Please leave your comments in the section below.