Why do we celebrate Eid-ul-Adha?

Eid al-Adha is fast approaching! As well as planning our party menu or our children’s presents, it is also important to remember WHY we celebrate Eid al-Adha? Where does this tradition come from? What does it symbolise?

Many people would be surprised to know that although Prophet Muhammad (saw) began the tradition of celebrating Eid al-Adha, it is actually a festival to remember Prophet Ibrahim (A.S.); his trials, forbearance, patience and unrelenting faith in Allah (S.W.T.).

Prophet Ibrahim (A.S.) plays a very prominent role in the Islamic faith, being mentioned in by name in the Quran 69 times, second only to Isa (Jesus)(A.S.) who is mentioned by name 187 times. Prophet Muhammad (A.S.) is only mentioned by name 4 times, although it must be remembered that he was often addressed directly in the Quran by Allah (S.W.T.), and called by many other names. In Islam Prophet Ibrahim (A.S.) is given the title “Khalil-ullah” meaning “the friend of Allah.”

Prophet Ibrahim (A.S.) is described as a model of obedience and righteousness:

“Surely Abraham was an example, obedient to Allah, by nature upright, and he was not of the polytheists. He was grateful for Our bounties. We chose him and guided him unto a right path. We gave him good in this world, and in the next he will most surely be among the righteous.”

Allah (s.w.t.) tested Prophet Ibrahim (A.S.) will numerous trials and tribulations, but his faith never faltered. There are so many incredible stories about his life, and I urge you all to teach them to your children. A shining example of such a story is “The Sacrifice of Ismail.”

The Sacrifice of Ismail

Ibrahim is recorded to have a dream in which he believed Allah (S.W.T.) had commanded him to sacrifice his son Ismail. He told his son what have happened, and Ismail (A.S.), being a great prophet himself, agreed that if that was the command of Allah (S.W.T.), then they must obey.

This is why Muslims also make a sacrifice (Qurbaani) on Eid al-Adha; to commemorate the “sacrifice” of Prophet Ibrahim and Ismail (A.S..) We are advised to keep one third of the Qurbaani for immediate family, give one third away to friends, and another third to the poor.

This act of sacrifice, and willingness to give-up the meet and other worldly things, is a reminder of Ibrahim’s (A.S.) willingness to sacrifice that which he loved most in this world; his son Ismail (A.S.).

To Mark the End of Hajj

When performing Hajj we are constantly reminded of the story of Prophet Ibrahim.

“The first House (of worship) appointed for men was that at Bakka (another name for Makkah); full of blessings and guidance for all kinds of beings: in it are signs manifest, the station of Abraham-whoever enters it attains security; pilgrimage thereto is a duty men owe to God-those who can afford the journey; but if any deny faith, God stands not in need of any of His creatures”

A fundamental component of Hajj is travelling between Safa and Marwa, the two hills close to the Kaaba. This is in remembrance of the trials of Hajar (R.A.), the mother of Prophet Ismail (A.S.), who ran between the two hills in search of water for her infant son.

It is obligatory to spend time a specified time on Mount Arafat, the site of Ismail’s planned “sacrifice.”

Prophet Ibrahim’s footsteps are even preserved next to the Ka’ba for everyone to see!

It’s incredible to think that Muslims doing Hajj or Ummrah today, are following in the footsteps of Prophet Ibrahim (A.S.) as taught to us by Prophet Muhammad (S.A.W.).

Prophet Ibrahim (A.S.) is the Father of monotheism, i.e. belief in one God, and is revered by all ‘People of the Book.’

In the Hebrew Bible he is named Abraham (A.S.) and given the title “the Father of the Jewish people”. Through his son Issac (Ishaq) (A.S.) he is the great-grandfather to the twelve tribes of Israel.

As in Islamic tradition, Christians believe that the lineage of Jesus traces back to Prophet Ibrahim (A.S). In the New Testament (Luke 16:22), Luke describes how Jesus (A.S.) spoke of Abraham’s bosom as a “symbol of Paradise”.

The Christian and Jewish faith also believe in the story of Ibrahim’s sacrifice, however their scriptures indicate it was Prophet Ishaq (Issac) (A.S.) who was involved, and not Ismail (A.S.).

“Take now your son, your only son Isaac, whom you love, and go to the land of Moriah, and offer him there as a burnt offering on one of the mountains of which I shall tell you”.

Although there is some dispute about the location of “the land of Moriah”, many believe that it refers to the Temple Mount in Jerusalem; the area Muslims call “Haram esh-Sharif ” (The Noble Sanctuary).

Although there a some differences in the story of Ibrahim’s sacrifice, we are undoubtedly united by our belief in Prophet Ibrahim (A.S.).

We all believe in the one God he spoke of.

We all strive every day to follow in his Blessed example; an example of patience, forbearance, certitude, purity and unwavering faith.

We all carry with us a deep connection and love for Prophet Ibrahim (A.S.) in our hearts.

This Eid al-Adha, remember why we celebrate Eid Ul-Adha, and Prophet Ibrahim (A.S.); his trials and his sacrifice, and take some time to teach your children his story. Nurture a love for him in their hearts, so they may feel connected to one of the greatest Prophets and Messengers that has ever walked the earth. 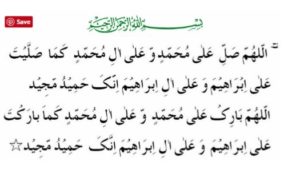 (In the name of Allah, Most Gracious, Most Merciful)

Which of the stories of Prophet Ibrahim have you learnt the most from?

Have you spoken to your children about the meaning of Eid al-Adha?

How will you teach them about Prophet Ibrahim?

Please share with us in the comments section below!